Bloodstains on the Wall

Upon closer inspection, you notice the bloodstains on the wall are not merely trickles or splatters that were scattered at random. Whereas the floor of the room is mostly devoid of gore, the walls were covered in bloody handprints going all the way from the steel safe door to the opposite end. You reason that, once Lord Roman found himself locked in here and safe from his assassin, he supported his body weight on the perpendicular surface to move more quickly to the shadowy end of the room.

And why would he do that, lest he knew something you do not know?

Following the bloody prints, you reach the back end. The trail becomes more scarce, probably because the poor man stopped holding his wound and focusing on remaining upright as energy faded. The markings then end abruptly as you reach the body; that is where he ultimately collapsed, inches away from the back wall.

And that is where you see it. In the shadows, it was almost unnoticeable, but now your flashlight illuminates a thin space outlining a rectangle against the concrete. It is only visible thanks to the contrasting tone of scarlet blood that dripped down its edge. A door! The realisation gives you a surge of relief and hope to escape your predicament. You step back and survey the surrounding wall, hoping to find a way of opening it.

There! A box embedded in the wall. It contains what seems to be a clockwork mechanism with a lever. Within the box, a brass panel with a seven-segment display pad rests, ready to be used. Underneath, engraved in a brass plaque, a series of sentences appears to hold the code to figure out the correct combination. You deduce that each line gives you the clue for one number, making the combination a six-digit code. 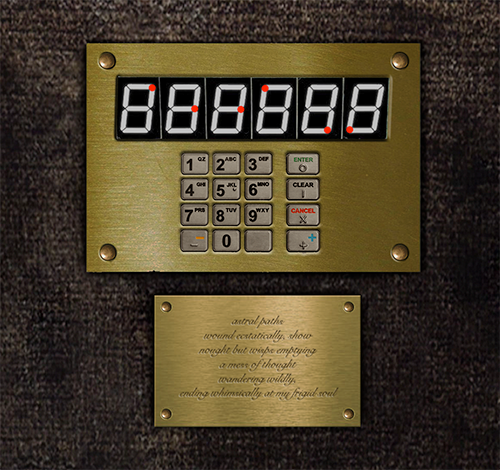 The red dots are your starting positions. Move them one segment at a time to trace each digit.
astral paths
wound ecstatically, show
nought but wisps emptying
a mess of thought
wandering wildly,
ending whimsically at my frigid soul

•❅──────✧❅✦❅✧──────❅•
To find the direction, you better use a compass.