The clanking of the lock clicks and you open the heavy door. A large, vacant room presents itself before you. And, at the far end of the room, resting against the wall in a pool of dried blood, you see the remains of Lord T.N. Roman. You saunter over to him and kneel down. His face is pale and sunken, and one of his hands clutches his belly. Removing it, you see two dark incisions. Gunshot wounds. 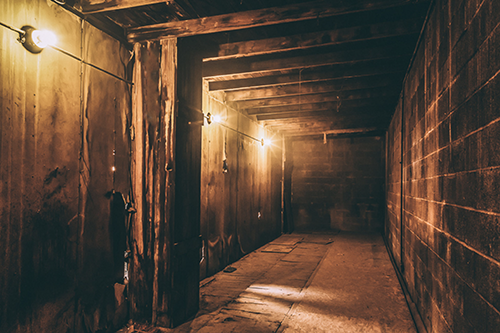 Steps echo behind you, and you turn around to see a familiar figure standing at the other side of the door. Mr Verdana has an expression of disenchantment in him as he addresses you.

“Frankly, I did not expect you to solve Roman’s riddles so quickly,” he says. You look at him with concern as he continues, “I would have gotten rid of the body after I shot him, but he managed to slip away while I sought the implements to clean his trail. Two weeks ago he locked himself in here and I was unable to figure out his mechanism. Luckily, you decided to show up to the party.”

“Mr Verdana? You were the one who killed Roman? Why?” You begin to stand up, but stop once you see the gun in his hand.

“To keep the manor, of course. Late Lord Roman had no direct heirs and his estate is now left in my care. In a few years, it will legally pass to be my property. I would have gladly waited but, alas, Roman decided he would change his will and leave it to someone else. So, naturally, I had to remove him and anyone close to him. Much to my bliss, you are all here.”

“So, you intend to remove us one by one?”

“Indeed, and you shall be the first.” With those last words, Verdana pulls the door back to its initial position and a loud clasping sound confirms you the worst outcome: you are locked in with the victim you so much wanted to find.


You cannot waste any time. You must find an exit and return to the party to warn everyone about Verdana’s intentions. Glancing around, you notice that, besides the haggard skeleton resting at the end of the room, there are a few elements you can use to deduce an exit. Do you investigate the dial combination next to the lock or the bloodstains on the wall?